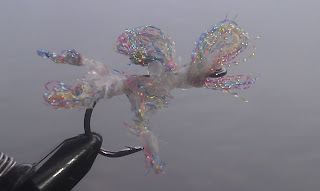 Striped bass flies are born out of necessity, imagined need and plain creativity.
Sometimes the conditions on the water seem almost impossible to replicate. Matching the hatch appears difficult.
One example of almost impossible situations is mid summer on a very calm ocean when striped bass, bluefish and bluefin tuna are feeding on krill.
Krill are small crustaceans and are found in all the world's oceans. The name krill comes from the Norwegian word krill, meaning young fry of fish. In our Northeast waters we have lobster krill, shrimp krill and crab krill.
Krill are considered an important trophic level connection – near the bottom of the food chain – because they feed on phytoplankton and to a lesser extent zooplankton, converting these into a form suitable for many larger animals for whom krill makes up the largest part of their diet. Most krill species display large daily vertical migrations, thus providing food for predators near the surface during the day.  At times they remain on the surface for days on end.
A single krill is difficult to see, but when tens of thousands gather together they can be seen as large globs near the surface being corralled by predator fish. Or there will be scattered krill looking like pollen on the water’s surface.  The predators become very selective and usually won’t touch any other offerings from an angler.
One year I got real lucky using a small shrimp fly, so I realized stripers would take the fly when a krill hatch is on. But how could you actually match the hatch of such a tiny natural and have a hook bold enough to hold stripers?
I eventually came up with the fly pictured with this article. I was so embarrassed about its sophomoric look, I never exposed it to anyone but my finest and trusted customers who all laughed until it worked for them. The first fish I caught on the krill fly was a 26 pound bluefin tuna.
Last spring on Cape Cod we had a small cookout with a few light tackle fly guys. During our discussions, the problem of fishing striped bass when they were on krill came up. I mentioned the fly and all were interested. I sent the photo of the fly to the guys and asked them not to laugh.
Mike Rice, a commercial fly tier dba Mud Dog Saltwater Flies of blooded pedigree, wrote back and commented, “Doug- I like that. It’s brilliant actually”.
So, for the first time, I present the krill fly for public consumption. To my knowledge there is no other krill fly out there. Remember, this is a specialty fly which only produces when fish are feeding on krill, usually late summer and early fall in our Northeast waters.
Big stripers and blues will look like sipping trout, just rolling softly on their prey. While fishing the krill fly, use a floating line and leader, keep a tight line and move it painfully slow. When a fish shows to take the fly, wait for it to turn on the fly before setting the hook.
I use 1/0 and 2/0 TMC – 600SP hooks for stripers and 5/0 for small tuna. The tie is simple. Tie a few overhand knots into a clump of rainbow crystal flash, fold material over the hook and tie in with clear thread and then bow tie it back over the hook. Several bunches tied in randomly complete the fly. Coat the inside areas of the clumps with Softex or thinned Goop to provide separation and form. Form is not exactly the term for this fly because it has no defined form.
Posted by Pinetree at 12:22 PM