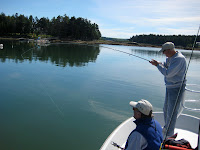 Maine’s recreational, saltwater fishing cannot improve and go forward with meaningful programs for Maine’s residents without money. For the first time, Maine can begin to fund such programs if a saltwater license is in place to raise money.
Posted by Pinetree at 1:43 PM No comments: