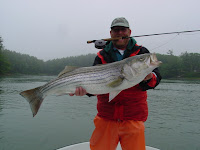 Fly fishing for striped bass in Maine during 2011 is most likely going to be for big fish from 30 to 36 or 40 inches and larger as the viable year classes migrating to our shores will fall into that size range and there aren’t prolific other year classes of stripers roaming the Atlantic Ocean.
The National Marine Fishing Service’s recreational angler survey (“MRFSS”), states recreational striped bass catches along the Atlantic coast declined by 66% from 2006 to 2009. Expect striper fishing during 2011 to provide quality not quantity fishing.
The Chesapeake Bay year classes likely to provide numbers of fish are: 2001, 2003 and 2005 with a few from the 1996, 1993 and 1989 classes. Striper sizes will likely be as follows.
The best year class out there is 2001 which will be 35 to 36 inch, 10 year old fish. The 1996 year class is meaningful in mass with fish being 44 to 45 inches, 15 year old fish. The 1993 class provides the best chance at a fish over 50 inches. This year class will be 18 years old, 50 to 51 inch fish. A striped bass at least 60 inches long and 22 years old will be rare and come from the 1989 year class or earlier. 2005 fish will be 6 years old and 26 to 28 inches .
The class of 2003 will provide a few 8 year old, 31 to 32 inch fish.
These are the six remaining year classes that had a meaningful, successful spawn in the Chesapeake Bay. They are the classes we will be fishing over for several years.
So, now is the time to prepare for those larger fish. Big fish like big flies, at least most of the time they do. That means begin tying or purchasing larger flies and learn how to cast them. Be certain you have the proper fly rods, lines and leaders to accomplish the job.
Most fast action nine and ten weight fly rods should do the job. While using floating or intermediate density fly lines it might be advisable to use a fly line at least one weight higher than the rod is rated for. Don’t be afraid to go two weights higher. Integrated sink tip fly lines such Cortland Quick Descent lines in 350 to 650 grain weights should be the line used most, even in shallow water. It always amazes me while fishing a 650 grain head in three to five feet of water how often I don’t get hung on the bottom.
Keep your leaders short to turn over big flies. Three and four foot leaders are enough. My system is mostly a length of 20 pound fluorocarbon. If I’m fishing close in to ledges I might tie on a short section of 10 or 12 pound tippet so I can break off easier when caught up in close with a heavy sea following.
Fish the large flies slow and deep. Change the pace a little and stall your retrieve occasionally. Big fish will approach a fly deliberately rather that quick and aggressively like schoolies do.
These big fish classes will be around for a few years until they get fished out. Then what? Stripers Forever’s Brad Burns summed it up in a press release summarizing a yearly survey of anglers and guides. “The results in 2010 were by far the most disappointing that we’ve seen for both anglers and guides” said Burns, President of Stripers Forever. “In our 2010 survey, 76% of all anglers reported catching fewer or many fewer stripers per hour of fishing. This is up from 66% in 2008 and 72% in 2009.”
“The Atlantic States Marine Fishery Commission continues to report that officially, things are fine with striped bass, but there are a lot of people out there who would not agree with them,” Burns continues. “This year’s survey was completed by 1,068 anglers, including 109 fishing guides representing every coastal state from Maine to South Carolina except New Hampshire. The vast majority of these fishermen have more than 10 years of experience fishing for striped bass.”
Stripers Forever is a non-profit, internet-based organization advocating for the conservation of wild striped bass by designating them as game fish and managing the resource for the estimated 3 million recreational striper fishermen and the vast industry that they support on the Atlantic coast. In-depth studies show that the game fish approach would yield the greatest financial and social benefit for everyone involved in the fishery. Stripers Forever has more than 16,000 members.
Posted by Pinetree at 5:32 AM No comments: