There are times when, for numerous reasons, when some form of stability is worthy of use while fishing from the bow of small boats.
My casting cage design has been used on boats of the northeast for at least 15 years. They are strange looking and appear to be nothing but another piece of equipment to get in the way.
How this useful item became a reality was the need for quick, safe movement of a boat into position to cast with a fly to breaking and moving false albacore on in the fall.
Prior to using the casting cage, I would need to wait for my sport to secure his or her line, move off the bow of the boat and hold on so I  could move the boat quickly to busting fish a hundred or so yards away. The delay usually meant we wouldn’t get to the fish before they stopped busting and we would lose the golden opportunity of making an approach fast enough to get a good cast into the mealy. For safety reasons, I couldn’t risk having a sport standing on the bow while I bounced along quickly to approach the fish. With the cage, my sport could stay in place, saving precious seconds in getting to the false albacore.
The design is the genius of one of . His first design has never been change which is a testament of his thoughtful approach to having a new and safe way to fish from the bow of a small boat. The cage has a square base receiver which allows easily moving it in four different positions allowing using it as a simple leaning post or positioning it for casting to one side of the boat or another. The large tubing doesn’t irritate your body when you lean into it like other designs which usually will be seen with some form of padding to account for the discomfort of smaller diameter tubing. 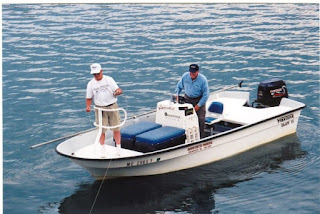 Blue Water Fabricators of Warren, Maine owner Alex Martins built the original casting cages I use and continues to make a few each year. The Made In Maine brand certainly proves its worth as Alex’s work has with stood 15 years of heavy use in the salt environment, showing almost no wear.
My first use of the safety devise proved its worth as angler after angler praised the tool while chasing the famed false albacore speedsters on in the fall.
As older and less stable fishermen began trying the cage, it became evident that using it for a day of fishing certainly decreased to fatigue factor usually accompanying a full day of fly fishing on the bow a boat.
Originally, I had one receiver in the front of the boat. I soon had Alex make me another receiver to install in the stern as a place to store the devise when someone didn’t want to use it.
Fly fishers prefer to be on the bow of a water craft to gain the best advantage possible. Jokingly, many pairs of sports will ask about who will get the bow first. So, one year, a man and woman couple who always have a fun time had a routine of deciding who was going to fish from the bow and for how long. On a calm day, asked to have the bow cage moved to the stern as he believed he could fish better without it. His wife Barb, got to use the cage in the stern. being kindly, eventually asked his wife if she would like the bow. She said no as she was happy in the stern.
As time passed, Barb elected to stay in the stern, which couldn’t quite understand. As the breeze picked up and boat movement gained, Barb asked if she could now move to the bow and obliged. But, Barb smiled and asked me to move the cage to the bow. almost immediately noticed how unstable he was fishing in the stern without the cage, but didn’t complain too much. Just a few comments about of how lucky Barb was to be using the cage all day.


After their three day fishing trip we settled up and said our good byes. Barb allowed how they had a wonderful time and would consider returning next year only if I had two casting cages. They were joking of course. However, I gave that some thought during that winter and order another cage from Alex. I didn’t say a word to Gary and Barb. They booked another trip the following year and were delighted to see two casting cages on the boat.

Posted by Pinetree at 8:42 AM No comments: