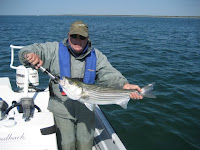 As the striped bass fishing season becomes part of the focus of anglers for the 2009 season, commercial striped bass fishermen are attempting to receive at 25% increase in quota through the Atlantic States Marine Fisheries Council (ASMFC) system and it's striped bass advisory council. This action will be considered at the ASMFC's May 7, 2009 meeting.

New science that indicates at sharp decline in striper populations along the entire eastern seaboard is being reported rejected by the advisory council after the recent focus of abuses of commercial striped bass fishermen and fish dealers. Strong fines and jail sentences are just recently being handed down by judges. The last vote of the striped bass advisory council of the ASMFC on increased commercial quotas rejected any increases by a tie vote.

If there is any increase in commercial striped bass fishing along the Atlantic Coast, the striper population is likely to collapse within a short, few years in my opinion.

Please contact anyone you know who might influence the voting at the ASMFC meeting to encourage restraint in allowing any commercial striped bass quota increases. Better yet, go to the meeting and express your displeasure of any such considerations. Go the Atlantic States Marine Fisheries web site (http://www.asmfc.org/) for full details of the meeting.
Posted by Pinetree at 8:32 AM No comments: