Circle Hooks Required In Maine on Coastal Waters Starting in 2013 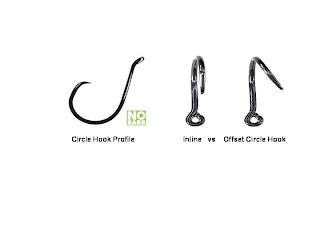 Photo ID – Circle hooks with or without barbs are now required by law while bait fishing on Maine coastal waters. NOTE:  Pending rule changes may allow Tub and Worm rigs to use "J" hooks. Check the law before fishing in 2013.

Striped bass 2013 fishing season in Maine begins soon and with it a new regulation for bait fishermen. Bait fishing will now be required to use non-offset circle  hooks only while bait fishing. The new law reads as follows:  “It is unlawful to use any hook other than a circle hook when using bait. For the purposes of this chapter the definition of circle hook means “a non-offset hook with a point that points 90 degrees back toward the shaft of the hook”.
The accompanying image illustrates what is legal for Maine striped bass bait fishing and what isn’t. Note the profile image hook point circles around to point towards the shank of the hook. The second image shows the difference between inline and off set hooks. Note the inline hook shows the hook point inline with the shank. If you put the hook on a table the entire hook should lay flat on either side to be legal. You can see that the offset hook would not lay flat if set on a table on either side.

If you haven’t used circle hooks to fish with, be aware there is a different way to set the hook. It’s this simple. Let the fish run with the bait and when the line comes taught without any effort by you, just lightly set the hook or wait for the fish to hook itself. If you use one of those downtown hook sets from the waters surface to over your shoulder with all the energy you can muster, you are likely to loose every fish you encounter. The hook set method is a little difficult to get used to until you realize it works. Usually the fish will be hooked in the corner of the mouth with no damage done from swallowed bait.
Fishing on the Kennebec River above legal head of tide is controlled by Maine’s Department of Inland Fisheries and Wildlife which has its own freshwater regulations in place for other species of fish as well as striped bass. There is a closed season there for keeping stripers until July first, the same as the DMR regulations. Other Inland rules stricter than DMR rules govern terminal tackle allowed. Check this rule here:  http://www.eregulations.com/maine/fishing/general-law-limit-information/
All other Maine saltwater fishing regulations can be viewed at:  http://www.maine.gov/dmr/recreational/documents/2012stripedbassregs.pdf
Early season striper fishing in Maine usually begins around early to mid May when ocean water temperatures rise above 50 degrees Fahrenheit. Depending on winter runoff in the mighty Kennebec River, the catch and release striped bass fishery will be active without bait until July first. The reason for catch and release and no bait fishing in the designated Kennebec River system is to protect native spawning stripers until the anticipated spawn has completed.
You might ask, is the Kennebec River actually producing its own native stock? The answer is yes. Maine’s DMR does an annual young of year sampling study which reveals natural production. It is not known where and when stripers spawn as expensive studies haven’t been done to find out. Historically, striped bass always spawned heavily in the big river until industrial dams were built. We have had several years now with a few dams removed, so striper production along with other indigenous fish continue to show signs of improved development. We just don’t know how good it actually might or could be.
Don’t forget you need a saltwater fishing registry permit to fish in tidal waters. Go here:  https://www5.informe.org/cgi-bin/online/dmr/swf/index.pl
Posted by Pinetree at 4:34 AM No comments: