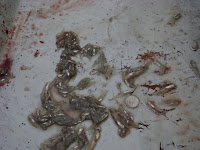 Striped bass politics is a frustrating activity. There is much happening on that front and I will address that in a post soon.
Posted by Pinetree at 5:06 AM No comments: