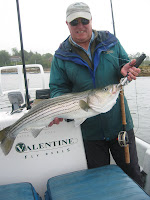 Here we go! It’s time to be thinking about the fall run of striped bass when they feed heavily to fatten for the long migration south to the Carolina coasts. The daily, surface feeding patterns are predictable and can last for hours. This is the time to put in long hours of fishing and do it daily. It’s a long winter when they are gone.

Feed will include young of the year herring, maybe pogies, mackerel, pollock, crabs and this year, maybe squid which have been very thick along Maine’s coast during 2012.

I acquired a new tool to help with the casting of large flies and long casts with poppers, my favorite way to fish for fall stripers. There’s nothing more pleasing in the fishing world as a vicious, surface strike on a popper. At least for me.

My new tool is a four piece, two handed Diamondback Swinger Switch rod in an eight weight configuration and 11.5 feet long. The new rod is rated for optimal loading at 425 to 525 grains which makes it a long range tool.

These rods are a little different than traditional two handed rods often referred to as Spey rods. Switch rods are designed to load quickly with specially designed switch fly lines that are heavily loaded in the front end of the fly line. Switch rods also can usually be cast using just one hand if the situation dictates.

With ease, one can cast over 100 feet with a shooting head or deliver a popper on a long leader. The outfit weighs almost nothing, but has a tip that delivers ample energy when loaded and fights very well on larger fish.

The fighting quality of the rod impressed me most. Usually, longer rods don’t fight as well as shorter ones. But, this rod is a fighter!

You do need a large capacity fly reel as the front end of the line is quite thick. I us Cortland’s Precision XC IV large arbor fly reels as they are light, wide in construction, have a strong drag system with plenty of room for a lot of line and backing.

My first striped bass of 2012 was caught while fishing Cape Cod this past May. It was a Moses moment. The sea parted as a very large fish took my custom popper. I was using the new rod. The fish was 38 inches long and it only took a couple of minutes to beat it to the boat for a fast release.

I don’t like fighting fish with light weight gear for the fun and challenge of it. I’ve known people who find great satisfaction using five weight or even lighter fly rods to fight striped bass. Yes, it takes great skill to do so, but the length of the fight stresses the fish to exhaustion and likely death after being released.

Another advantage the Switch rod has over the traditional Spey or Skagit rods is what I call the quick draw castability.

Spey and Skagit double hand rods are not the greatest tools for quick delivery casts to moving fish, say for false albacore. You need to present a fly quickly. Spey rods take a couple of movements to load for a presentation. A Switch rod is designed to make a fly presentation faster than the other two handers.

Since that first Switch rod fish last May, I have caught many fish in the upper thirty inch range to 45 inches. The Diamondback Swinger handled them all without stress. I’m most impressed and pleased to have a better tool to use while pursuing larger fish at long ranges.

My targeted species happens to be striped bass, so that’s the size fish I gear up for. Switch rods are available in shorter lengths and lighter lines designations down to 4 weights for trout fishermen and others preferring lighter rods.

Switch rod aren’t for everyone, but I certainly love them.

Strange things happening along Maine’s coast during the 2012 fishing season. First, an invasion of squid occupied the inshore waters of Maine from Kittery to Penobscot Bay. They were so thick, I caught them while jigging for mackerel with a standard sabiki rig and with a fly while chasing striped bass. In the middle of the day! People who actually wanted bucket loads of squid did so easily at night from a well lit dock area or on a boat with a strong light like a Coleman camping light. I for one have never seen such a strong run of squid from July through August. The numerous squid I caught were in four to 14 inches in size. There wasn’t any consistency to the size during a given bite. I haven’t spoken with anyone who has a good reason why so many squid invaded Maine’s inshore waters this year. Does anyone have a good response to why it happened? Personally, I know nothing about squid except striped bass love them. It’s their favorite food. Then there was the verified, mid August shark sighting at the Great Island Boat Yard in Harpswell, Maine . That’s way inside, not just outside the beach. There was another report of a shark just 50 yards of the beaches in the Wells area. That action closed the beaches at least for one day. On August 15, 2012 I recorded an all time, personal high water temperature of 77.6 degrees Farenheit in the Cundys Harbor waters at high tide when the coldest water of the day had flushed in. All these unusual events have had impacts on striped bass fishing.
Posted by Pinetree at 8:48 AM 2 comments: