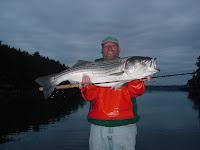 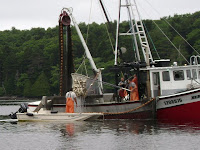 The past few days striped bass fishing has improved dramatically! Feeding stripers on the surface chasing brit herring has been sporadic but here. A beautiful sight after such a long, slow summer season.I saw one "monster" striper boated by a troller in the middle of the day. The big fish looked to be around 35 to 40 pounds. Now that's a change of pace. Good sized slot fish have become responsive to poppers. That means the fall games are about to begin. The commercial poggie boats are still around, using their nets very close to shore. The commercial bait boats are seining while the smaller bait chasers are using gill nets. SBFT, young tuna fish are in close along Casco Bay waters but not real active. A few small tuna and a handful of giants have been boated in our Maine waters. It appears that the giant tuna fishing has improved after one year of banning the use of mid-water trawlers during the summer months.The fall bite may be better than we have experienced during the summer months. Cross your fingers for improved fishing.
Posted by Pinetree at 2:51 PM